The Amazing Benefits Of Aloe Vera 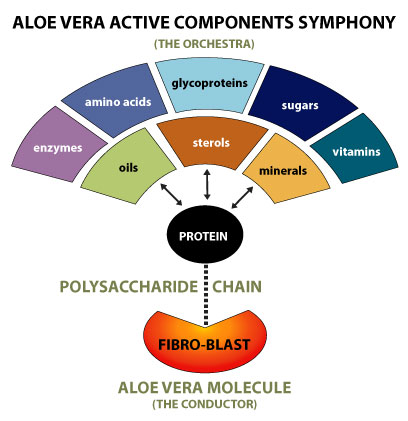 History has shown that Aloe Vera as dietary supplement provides a variety of health benefits. Although polysaccharides are an important part of Aloe Vera, other key components include: amino acids, enzymes, glycoproteins, vitamins, and minerals.

Scientific studies indicate that the components of Aloe Vera act in a synergetic manner – similar to a conductor leading an orchestra – resulting in a symphony of healthful benefits from Aloe Vera.*

Scientists have identified over 200 biologically active components in Aloe Vera.* At Terry Laboratories, we have conducted our own studies to determine the benefits of aloe vera and the incredible ways this plant can be used to enhance cell growth.

Terry Laboratories is the leading Aloe Vera concentrate supplier to conduct and publish in vitro research to determine biological activity on its own Aloe Vera. The following studies using Terry Laboratories’ Aloe Vera speak for themselves. No theories, no internal standards, no assumptions, no chemical tests. Just the living proof!

Testing the Compounds of Aloe Vera

The process for growing living skin in vitro called the Living Skin Equivalent™ (LSE) was developed by Organogenesis, Inc. (OI) and marketed under the name Test kin™. This system was developed in order to conduct certain types of toxicity testing on compounds in vitro, rather than in animal models.

Samples of our Aloe Vera Gel Regular and Decolorized 1X were submitted to determine toxicity using the LSE™ method. The Aloe submitted was not only completely non-toxic to the LSE™, but was in fact found to stimulate basal keratinocyte (skin cell) growth almost fourfold. Serial dilutions of processed Aloe Vera Gel 1X Regular and Decolorized were also submitted to OI for additional evaluation using the LSE™.

In an attempt to reproduce the results obtained by OI, samples of processed Aloe Vera Gel Decolorized 1X were also submitted to In Vitro Alternatives, Inc. (IVA), another independent testing facility skilled in the use of LSE™. The summary/conclusion from IVA states, “This test material appears to have caused a stimulation of cellular activity, such that this material enhances cellular activity and viability”. Based on the conclusions of IVA, Terry Laboratories recognized the need for additional research on the subject of Aloe Vera gel and its ability to enhance cell growth.

Upon conclusion of this study, samples of Terry Laboratories processed Aloe Vera Gel 1X, 10X and 40X were submitted to the Illinois Institute of Technology Research Institute (IITRI), a third testing facility, also skilled in working with the LSE™, to determine if another independent source could reproduce the acceleration of basal keratinocyte growth. A similar accelerated growth pattern was again demonstrated.

Summary of our Study

The research indicates that the higher the concentration of Terry Laboratories’ Aloe Vera gel the larger the increase in basal keratinocyte regeneration. It is important to note the linear relationship between Aloe concentration and its effect on basal cell proliferation activity which is significant.

Microscopic Slides from our Study

The following are 35mm slides of actual tissue cross-sections which have been treated with varying percentages of Aloe Vera Gel 1X as supplied by Terry Laboratories, Inc. The NAC (No Add Control), which serves as a basis for comparison, was not treated with Aloe Vera.

In the photos you will note the dark purple, granular cells which appear as granular spheres. These are germinating basal cell keratinocytes (skin cells). The more prolific the cells, the more accelerated cell regeneration is taking place.

6 Reason To Choose Terry Labs Over Other Aloe Vera Manufacturers